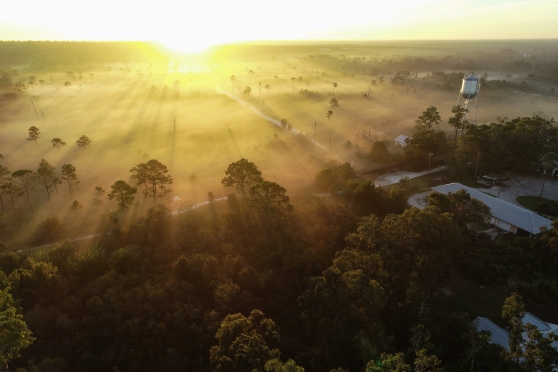 A photo of Archbold Biological Station taken during sunrise. Photo by Kevin Main.

Archbold Biological Station continues to implement new data collecting technologies using Unmanned Aircraft Systems (UAS), commonly referred to as ‘drones’. The Archbold Drone Program is expanding due to the kindness of generous donors, which allowed the Station to recently hire Geographic Information System (GIS) Research Assistant Paul Ruben. Ruben joins a small group of Archbold staff and consultants who are FAA Part 107 certified drone pilots. “I’m excited to work for such a storied science and conservation organization and to have the opportunity to use the newest technology in my field,” said Ruben. “Honestly, it’s a lot of fun and really amazing what drones are capable of teaching us,” he continued while watching a drone fly overhead on a mission to map the details of an earlier prescribed burn on the Station. “We use drones to map the boundary of a prescribed burn and document the fire intensity where the burn spread across different plant communities”.

Archbold uses commercially available drones primarily to support the organization’s scientific research projects and the needs of other state and regional conservation organizations and agencies. Archbold flights are limited to those over Archbold properties, or over partnering agency lands, respecting the privacy of private property owners. One on-going project includes monthly mapping the productivity of improved and semi-native pastures at Archbold’s Buck Island Ranch. Dr. Betsey Boughton, Director of Research at Buck Island Ranch, explained that, “Grassland productivity mapped by drones allows us to see the whole pasture, including which areas are growing fastest and we can tie these data to environmental stressors and agricultural practices. This is a valuable addition to our on-the-ground measurements.”

Vivienne Sclater, Archbold GIS and Data Manager, was recently included as a co-author on a scientific publication under review that addresses using drones to map gaps or open areas between plants in a very rare scrub habitat called Rosemary bald. This research is contributing towards understanding how threatened and endangered plants interact in these open sandy gaps, which were previously very difficult to map. Sclater is also the Vice President and board member of the International Society for Conservation GIS (SCGIS) and sits on the Highlands County Natural Resources Advisory Commission (NRAC). “Having access to real-time aerial data has huge implications for Archbold research and for the conservation of scrub habitat here on the Lake Wales Ridge,” Sclater explained.

Consumer, non-military drone technology has grown dramatically over the past two decades and continues to offer ever-increasing possibilities for science and conservation. Ruben described, “In 2020, the Archbold Drone Program plans to further expand these capabilities by adding what is known as ‘3D point cloud data’ so we can build a 3D map of vegetation, not just a typical 2D surface map. This will allow us to model factors such as what is the best habitat structure for the Florida Scrub Jay. These data could teach us more about how fire intensity impacts suitable habitat for the federally threatened and endangered species.”

Fittingly, Archbold’s primary drone is named “Guba Jr.” in homage to the Consolidated Aircraft PBY-2 flying boat owned by Archbold’s founder, the famous aviator and explorer Richard Archbold. He called his plane GUBA (Papuan for “sudden storm”) and used it to support his celebrated Archbold Expeditions to New Guinea in 1938-1939.