As one approaches the Archbold Biological Station on Old State Route 8 both sides of the road are lined with dense even stands of knee-high grass. A distinctive feature of this grass is its clumps of messy blackish seed heads. The same grass can be found along many roads through Highlands County. While not unattractive to look at, woe betide anybody attempting to walk through this grass when it is producing seed, for they will end up with hundreds of sharp-pointed seeds working through socks and even through fabric running shoes. This plant is Tanglehead Grass (scientific name Heteropogon contortus). Tanglehead seeds also work their way into the fur of animals, and where tanglehead is abundant in other states it can prevent raising sheep because of the intense irritation caused by seeds penetrating the wool and lodging in skin.

While tanglehead seeds are annoying, they are so beautifully adapted that they can claim our grudging admiration. The end of the seed, sharp enough to easily pierce fabric, has a tuft of glossy red hairs that may serve to stabilize the tip of the seed as it works inward. Stout backward-pointing hairs on the seed probably have the same effect. The seed is attached to a long, slender, irregularly twisted bristle; botanists call this bristle an “awn.” Under high magnification the awn can be seen to be wrapped in a tight spiral.

“This makes possible a fun experiment,” says Archbold researcher Dr. Mark Deyrup, who has been observing the local invasion of tanglehead for several years. “Arrange a row of tanglehead seeds on a piece of white paper. Lick your finger and run it along the length of each awn. The seeds will immediately begin to writhe about on the paper.” This movement occurs in nature when dry seeds are exposed to dew or high humidity, resulting in large numbers of awns tangling together to make the characteristic ‘clumps’ of tangled seeds. The clumping of seeds makes it easy for furry animals (or socks) to quickly pick up large numbers of seeds. These seeds may be dispersed some distance away as the tanglehead victim begins grooming. The movement of the awn serves another, more important function: if a seed lodges in a crack in the soil the squirming awns drive it further into the ground. 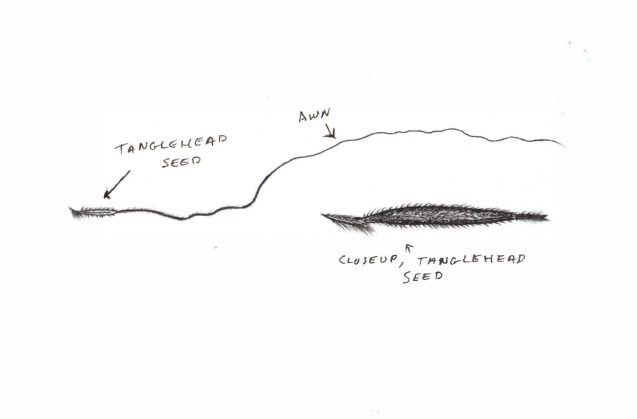 Tanglehead is native to the Old World Tropics; like other invasive, non-native plants it worries biologists at the Archbold Biological Station. So far it has moved only short distances from roadsides into the natural Florida scrub habitat that the Station tries to protect. Kevin Main Archbold’s Land Manager notes, “Regarding control and treatment of tanglehead, we have had little success so far at Archbold. We have tried spraying it with glyphosate. It does brown up the grass, but it comes right back the next year. We’ve also tried to mow it often to keep it from flowering, but it still manages to flower some, at a shorter height. Information in online herbarium specimens suggests it is generally collected from disturbed sites. That is also true at Archbold where it recorded along paved roadsides and sand roads with shell added. I believe it may have something to do with pH with soil; in the road right of way near Archbold’s entrance the pH was neutral to slightly alkaline, and far less acidic than the neighboring scrub soil a few meters away. There are however no research data available to test or confirm the factors controlling its distribution.”

Scrub habitat seems to resist colonization by many species of invasive plants, a resistance that will be tested as furry animals such as raccoons transport tanglehead into undisturbed Florida scrub. In most situations, Tanglehead, like the equally obnoxious sand spurs, is more of an inconvenience than a problem. It does not seem to be an agricultural pest, except in sheep pastures. It makes good cattle forage until it sets seed, and regular grazing or mowing can prevent seeding. Its effect on local furbearing animals is apparently unknown, likewise the suitability of its seeds for seed-eating birds. Tanglehead could also be problematical for some pets. “We have a wooly sort of terrier,” says Deyrup. “If she romps through tanglehead the whole family has to deal with the fallout of nasty tanglehead seeds.”

One thought on “The Bad Seed: A Tangled Tale”