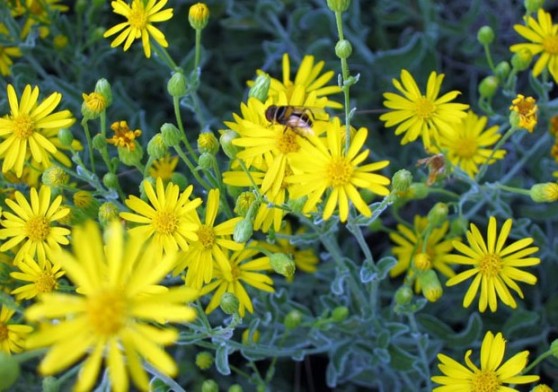 Florida Goldenaster flowers in bloom attract a native pollinator. They have one of the longest flowering periods of any Florida wildflower. Photo by Steve Dickman.

Both prominent establishments along Lake Wales Ridge since their beginnings in 1941 and 1929, Archbold Biological Station and Bok Tower Gardens have been longtime collaborators. One an expert on plant demography of rare species and the other an authority on native plant horticulture, Archbold’s Plant Ecology Program and Bok Tower’s Rare Plant Conservation Program have most recently teamed up to study the federally endangered Florida Goldenaster (Chrysopsis floridana).

“This charismatic bright-yellow flowering species is endemic to just four counties in west-central Florida,” says Archbold Research Assistant Katherine Charton. “Development depleted its native upland habitat and led to its decline. However, since its listing in 1988, the recovery plan set in place for this rare plant has made substantial progress.” Recovery efforts included public land acquisition where the plant occurred, fencing sensitive habitats on both public and private lands, performing controlled burns, and reintroducing seeds to protected areas where the plant had been previously extirpated.
“Some of the concerns facing the plant in the 1980’s have been addressed,” continues Charton. “There are now a number of sites — and thousands of plants — under protection. We have also seen the success of several introduced populations thanks to Bok Tower, who rescued plant material for the purpose of propagating individuals and reestablishing locally extinct populations.” The noticeable recovery of the species led the U.S. Fish and Wildlife Service to recommend its downlisting from endangered to threatened in 2009. However, this downlisting has not yet occurred. Data-driven evidence is needed to assure the species is truly thriving — and sustainably so.
“Recovery objectives for this species outlined by the U.S. Fish and Wildlife Service require empirical data showing that there are a sufficient number of self-sustaining populations on protected lands,” says Dr. Eric Menges, Archbold Plant Ecology Program Director. “We are helping to evaluate this objective by monitoring the species in the wild.” Now in the second year of the study, a field crew led by Charton and Bok Tower Rare Plant Curator Phil Gonsiska visited 18 populations and more than 4,000 individuals last November and December. Plants are tagged in permanent plots to evaluate long-term survival, growth, and reproductive status. Archbold’s Plant Ecology Program has long used these tried-and-true methods to monitor a number of other Florida species. The Florida Goldenaster is just one of three rare, endemic species in the Chrysopsis genus studied by the program.
“This kind of research is critical for conservation efforts,” says Cheryl Peterson, Bok Tower Conservation Program Manager. “Effective conservation strategies are based on regular updates of the status of the remaining populations, allowing us to understand how the species responds to various environmental conditions.” Adds Charton, “We’re able to quantify various environmental conditions using a number of parameters in the field. Preliminary results have shown that high bare sand cover and low litter, shrub, and canopy cover correlate with plot occupancy by the Florida Goldenaster.”
“This is important knowledge that can aid management decisions of lands inhabited by the species and ensure its continued survival,” explains Charton. “We look forward to analyzing how these trends fluctuate year to year once we have more data.” Archbold and Bok Tower will return to the field once more to monitor the yellow-flowering plant in the fall of 2019, the final year of the U.S. Fish and Wildlife funded study. 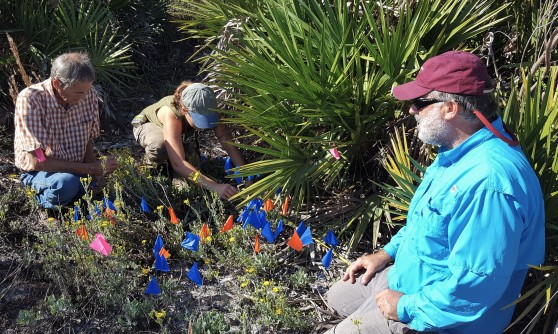