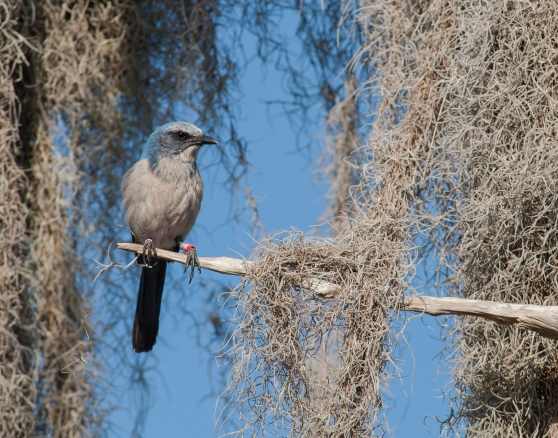 Although eBay is a household name in e-commerce and extraordinarily successful, their name was an afterthought. Founded it 1995, the company was originally known as Auction Web, owned by a parent company named Echo Bay. When they tried to establish a domain name for their web-site, they discovered that echobay.com was already taken so they shortened it to their second choice, and thus eBay was formed. But unbeknownst to the founders of eBay, EBAY had long been the name of a territory of Florida Scrub-Jays at Archbold Biological Station.

Dr. Reed Bowman, Director of the Avian Ecology Program at Archbold, who also directs Archbold’s long-term study of jays that began in 1969 and continues today, said “We assign four-letter codes to all jay territories, usually based on some nearby landscape feature. This association with the habitat helps us remember where each territory is and which birds live there, facilitating monitoring. In 1983, a new jay territory formed that included a bayhead. A bayhead is a swampy, less flammable habitat where bay laurel trees predominate. This bayhead was the eastern-most of two, thus we referred to the territory as East Bayhead, which in our coded convention shortened to EBAY.” The EBAY territory was originally only about 20 acres, but it has grown over time, and 37 years since its formation its now over 40 acres. Like eBay, it has grown over time too, in part, because both have been successful.

Like companies, where we can track financial performance, long-term data on birds can reveal differences in individual performance – in biology, usually measured as the number of offspring each breeder produces over its lifetime. In the Archbold jay study, each bird is uniquely banded so we can tell one from another. Scrub-jays pair for life and over the past 37 years we have had seven different pairs of breeding birds at EBAY, but only 5 different males and 5 different females. Some pairs persisted many years – only 2 different pairs of breeders lived at EBAY from 1983 to 2004, one pair persisting for 10 years, another for 11. But some pairs lasted only 1-2 years, and birds sometimes had multiple mates, re-pairing if their mate died. Over the years, these birds have produced 56 fledglings, but life for these young jays is tough. Dr. Angela Tringali, a post-doctoral research fellow in the Avian Ecology Program said, “just a bit more than half of all fledglings survive the first 90 days, but because our study follows birds throughout their lifespans, we can measure how many eventually become breeders and produce young of their own – the very best measure of an individual birds’ success.” To date, 8 of the 56 fledglings from EBAY have become breeders. Although this seems like a paltry number, it is enough to replace their parents that have died, keeping the population stable. Birds might not breed until they are 2-3 years or older thus some of the recent fledglings may still yet become breeders, producing enough individuals to grow the population, or at least outcompete some of the neighboring families and replace breeders from those territories with descendants of EBAY.

Dr. Bowman added “We can track these same life history changes on the 75-80 different jay territories in our study, and we can assess how different environments or periodic events such as storms or fires, can influence survival and reproduction, and from this we begin to see the big picture and a better understanding of what influences the success of Florida Scrub-Jays. These insights can and have led to truly successful conservation actions, such how management can meet jay’s need for high-quality scrub that is burned every 10-20 years.” eBay has been a successful company – nearly everybody has bought something that they value, and the investors made a profit, but EBAY has taught us invaluable lessons that may yet save this imperiled species from extinction.

EBAY territory the year it was formed

One thought on “The Original EBAY”