Archbold Biological Station offered two outstanding students Miranda Bunnell and Ashley Engle, both rising seniors at Lake Placid High School, a special opportunity for 2018 summer work at the Station. Their excitement, exuberance and newly-found appreciation for science and love of the Florida scrub comes through wonderfully in Archbold’s new short film entitled ‘The Science of Life’, highlighting their experiences. The film is by Jennifer Brown from Into Nature Films and can be viewed on Archbold’s Vimeo channel at https://vimeo.com/287927771. 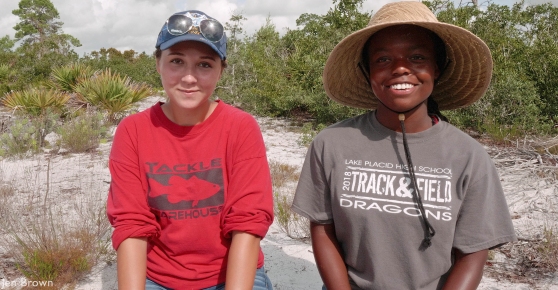 Stephanie Koontz, plant ecology Research Assistant who oversees the students explains, “They have to apply just like any job, with a resume, a formal interview, and a field interview. Our goal is to expose them to science and to the natural world. They need to think critically, read the scientific literature, ask good questions, and give a scientific presentation. It would be wonderful if they all became future ecologists, and some have.  But the kind of skills they get here can be applied to all sorts of careers and for the rest of their lives.”

Under the guiding hand of Koontz and other Research Assistants such as Annika Rose-Person, Miranda and Ashley gained a lot of experience working in the field with staff, visiting students, and research interns. They also conducted their own research projects. Miranda studied Yellow Milkwort, a wetland plant. “I thought the shape of the flower was unique, like a little pine cone, bright yellow too. After I saw it for the first time I decided I really wanted to work on it.” She found out plants grew taller in shaded areas than in full sun.  Ashley studied another yellow-flowered plant, Partridge Pea, to see if it would do better in disturbed areas or in intact scrub. Plants in disturbed areas did indeed grow more than plants in scrub, but few plants flowered in either place during her study. Miranda summed up their science experience, “You ask a question and you think you know the answer to it, but when you test it, it’s not how you thought it would be. There are so many answers and possibilities as to why that happened.”

Miranda and Ashley out in a wetland at Archbold conducting plant research. Photo by Jen Brown

Miranda and Ashley describe life at Archbold, “We have both lived here for most of our lives so we are pretty used to the surrounding area, just new to the Florida scrub. Being out at Archbold has been really fun.” “But”, as they both laughed, “We have a long list of things we had to get used to, like walking out into the scrub.” Ashley explained “I’ve only been on trails before. Cactus gets me every single day we are out in the field. I always tell everybody—All right, this is another great day for stepping in cactus. Being out with scientists, seeing what they do is, Wow! I appreciate the Florida scrub a lot more. At the beginning I thought scientists were just going to be big know-it-alls but now I see you guys work really hard to save these habitats. You made me appreciate nature a lot more. Everywhere is a big classroom, a classroom doesn’t have to have desks and chairs, and you learn where you go.  Eric Menges and Stephanie Koontz have been awesome mentors”.  Miranda noted in a heartfelt way, “I love coming out here every day and getting to work with these smart people. They have inspired me to inspire other people too. When I first got here it was a little scary, wondering what was lying beneath the bushes and the palmettoes, the bugs and cacti, but now I don’t even second guess any more. It’s just a daily thing. I’m feeling really accomplished and happy.” Ashley added, “I’m going to miss being outside every day—I am going to miss that a lot.”

Ashley and Miranda were supported by a program called Research Assistantships for High School Students funded by the National Science Foundation, the nation’s scientific funding agency. The funds are awarded as a supplement to Dr. Eric Menges’ ongoing plant ecology research grant. He explains, “Since 2007 we have awarded 20 Highlands County students these summer positions. It has been gratifying to see their respect for science increasing while they are here, and watch their future careers. The joy and the spirit they bring to our program makes it a wonderful experience for us.”

Jennifer Brown added her thoughts, “From the first minute of filming Ashley and Miranda, I was charmed by their storytelling. These two brilliant, curious young women give me hope for the future.” Hilary Swain, Executive Director at Archbold commented, “We are proud to offer this opportunity to local students. For them, a National Science Foundation funded-position at Archbold is a great addition to any high school resume. For us, it’s rewarding to know that they are going forward for the rest of their life with a sound appreciation for science and as ambassadors for Archbold. We like to think we change them and they in turn change us”.

One thought on “The Science of Life”