On Valentine’s Day biologists at the Archbold Biological Station enjoy sending and receiving romantic gifts of flowers just as much as anybody else. The colors and fragrances of flowers make them a perfect gift. Out in nature, however, biologists appreciate the messages of flowers in a different way. Most wildflowers are sending signals to insects, using perfumes or attractive color displays to advertise nectar and pollen. Pollen is the fine powdery substance produced by male plants (think, flower sperm) that is carried by insects (or other animals, or wind) to the female part of the flower and fertilizes it. Some insects, especially bees, eat pollen or provide it to their larvae as food. Nectar is the sugary liquid plants produce, especially in their flowers, to encourage (reward) visits by insects and other animals. 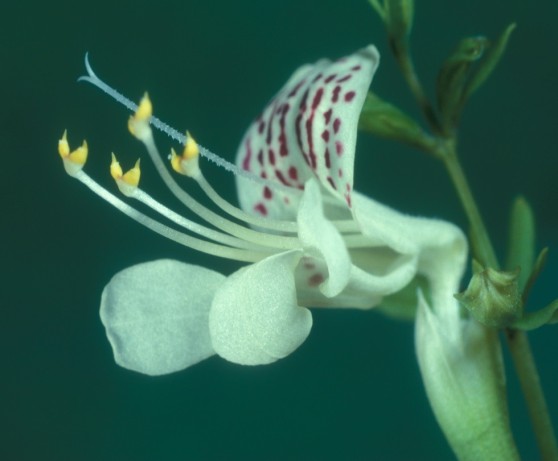 Different species of flowers “advertise” their nectar and pollen with different color patterns or perfumes, so that individual insects including bees, wasps, beetles, butterflies, moths, and flies become faithful to a particular “brand” of flower. This is important for the plants because pollination requires that insects move from flower to flower of the same species, carrying male pollen from one to the female parts of the next plant, fertilizing the flower. Being faithful to visiting one type of flower is as if insects are responding to flower trademarks, not unlike like the way many travelers get the habit of going to certain fast food restaurants. Archbold biologists, and notably entomologist Dr. Mark Deyrup, have been studying local wildflowers and their insect visitors for more than 30 years. Mark explained that “Archbold has one of the largest “flower-visitor” datasets in the world collected at one location. It is from these long-term data we learn which insects visit which flowers.”

Around Valentine’s Day there are few native flowers in bloom. A common weedy species is the Beggars-Tick, a daisy-like species with seeds that manage to get attached to socks and pants. This conspicuous yellow flower with white petals is an important winter source of nectar and pollen. Mark Deyrup shared that, “Over the years, we have recorded 81 different species of insects visiting Beggars-Tick, including 36 species of native bees and 18 species of butterflies.” 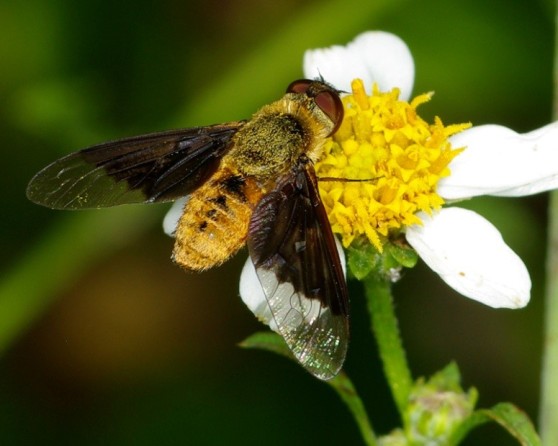 In contrast to the simple Beggars-Tick flowers, which are open to all insect-comers, there is a rare species of mint called Christman’s Mint growing east of Sebring that has an astonishingly complicated flower. Archbold’s plant ecologists including Dr. Eric Menges, have been studying this plant for years, in part because it is an endangered species. Describing this mint’s pollination system, Mark Deyrup said, “On its upper petals the flower has red markings that guide insects to landing pads formed by the lower petals. Nectar is at the bottom of a long tube with an elbow-like bend part way down. Various insects visit this plant, but one kind of insect, the bee-fly Exprosopa fasciata, can reach with its long tongue into the tube to extract the nectar, but must first push with its head on the upper petal. This causes the elbow to straighten enough to allow the fly to suck up the nectar. As the bee-fly pushes on the petal, its belly pushes down on several pollen sacks, or bags of pollen. This causes the pollen sack, which is under pressure, to burst out a sticky mass, and sticks onto the belly of the bee-fly, ready to be carried to other mint plants and pollinate them.”

The common Saw Palmetto produces flowers that are often partially hidden under the fan-like leaves, but a strong and distinctive perfume attracts insects to its many small flowers. Many of us long-term residents of Florida would like to buy a bottle of Saw Palmetto perfume, so evocative it is of spring in Florida, but we have to be content with the real flowers. A scientific paper published by biologists at Archbold describes the number of different kinds of insects that visit Saw Palmetto flowers. Mark Deyrup said, “So far Archbold biologists have observed an amazing 311 different species of insects on palmetto flowers, and there are undoubtedly others out there. Most of these insects use the flower nectar to fuel their adult activities, as if the Saw Palmetto were a gas station. One species of wasp goes off to chase down horseflies to feed its larvae, another wasp leaves to hunt for caterpillars in oak trees to feed its larvae, and so on.” The nectar that palmetto flowers use to attract insects that are pollinators also fuels innumerable other important activities in the natural world. 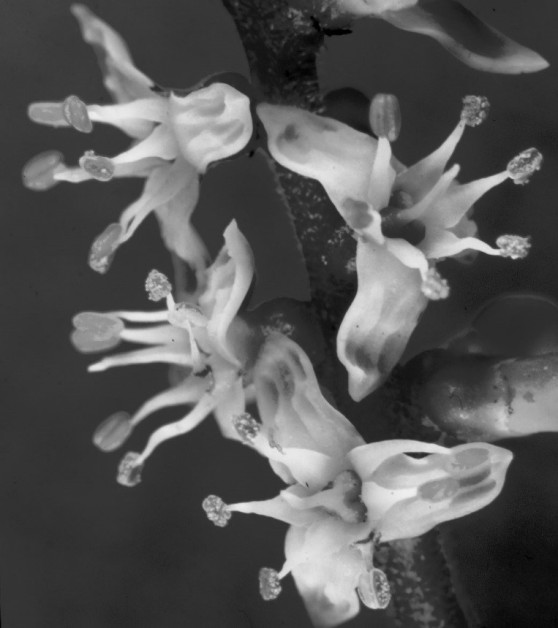