The natural areas of Highlands and Polk Counties are dominated by a sandy, shrubby landscape known as Florida scrub. There are many types of Florida scrub all defined by the plant species that inhabit them. One especially interesting type of Florida scrub is the rosemary scrub. Take a walk through a rosemary scrub habitat and you might notice some rather striking things. Bare white sand patches connect like a path, weaving in and out among a maze of large Florida Rosemary shrubs, the dominant plant species for which this unique habitat is named. Most populations of Florida Rosemary occur along coastal dune habitats from Florida north to South Carolina and west to Mississippi. Florida Rosemary are found in relict populations on remaining patches of Florida scrub occurring on the high dry sandy ridge that runs north-south through Highlands County, known as the Lake Wales Ridge. The Lake Wales Ridge dates back to a time, nearly a million years ago, when sea levels were much higher. Found at the top of these ancient rolling sand dunes, the rosemary scrub habitat looks like sandy islands in a sea of a dense vegetation. And yet, it is in this rosemary scrub habitat, along those open pathways between the Florida Rosemary plants, where most of the Lake Wales Ridge endangered plant species are found. Florida Rosemary itself is not endangered although it is listed as a threatened species in coastal Georgia, but rosemary scrub habitat has seen significant decline due to development, earlier conversion to agriculture, and hurricane damage along coastal populations.

Rosemary scrub habitats host a high concentration of plant species found only in central Florida, such as Scrub Morning Glory, Scrub Blazing Star, and Showy Dawnflower, many of which are listed by state and federal agencies as threatened or endangered. The Plant Ecology Program of Archbold Biological Station, led by Dr. Eric Menges, monitors the status of many of these rare plants, gathering information vital to their conservation. In addition, Menges and his team have been collecting data on the Florida Rosemary shrub, the species that shapes this habitat. “These shrubs are allelopathic,” explains Menges, “which means its leaves and roots produce a substance that leaches into the sand and keep many other species’ seeds from germinating. Without Florida Rosemary, many of the open gaps between these shrubs would quickly be filled by oaks and palmettos, and the very rare plants found only on the Lake Wales Ridge would lose their habitat.” 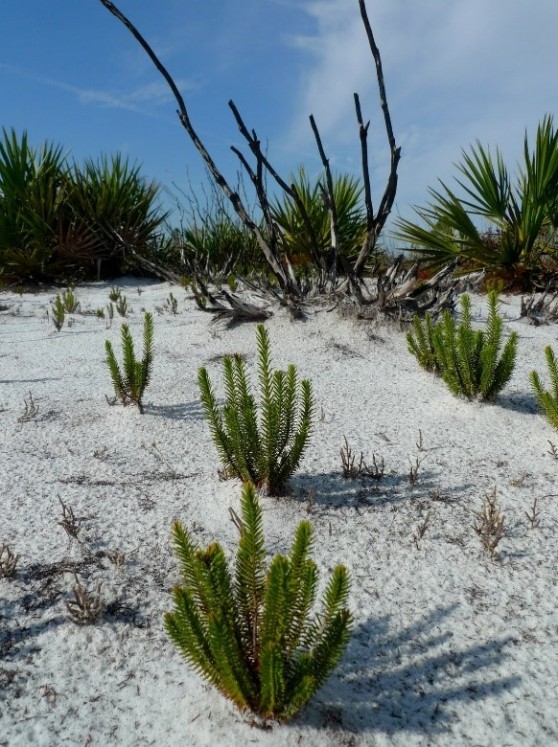 Like most habitats of central Florida, rosemary scrub is shaped by fire. Adult Florida Rosemary plants are killed by fire but seeds germinate from a soil seed bank stored in the years between fire events. Long-term research at Archbold, started in 1996, has led to many important insights into how this dominant shrub shapes its habitat. “Following a fire event, those sandy gaps and pathways and open mazes among the shrubs are reconfigured” says research assistant Stephanie Koontz. “It’s like a game of pick-up-sticks where, after a fire, someone picks of all the Florida Rosemary plants and drops them back on the landscape in a whole new pattern.” Menges and his team follow individual Florida Rosemary plants annually documenting survival and growth. Overall survival is high and young Florida Rosemary plants are slow growing, increasing in size by only a few centimeters a year. “To me, the most fascinating story we have learned about Florida Rosemary is its structure” explains research intern Lauren Maynard. “If you look at a Florida Rosemary shrub, it looks like this nice, large round individual when in actuality, there may be four to ten individual plants all woven together. We don’t know if they are competing or aiding in each other’s survival and questions like this can only be answered with long-term monitoring.” At Archbold, long-term monitoring of plants and their habitats is a vital tool in making informed land management decisions to maintain a balance of open, sandy pathways for rare species within the maze of shrubs.

What appears to be a single Florida Rosemary shrub may actually be several individual plants growing together. Researchers have to sort through individuals to measure changes in growth. Photo by Eric Menges.