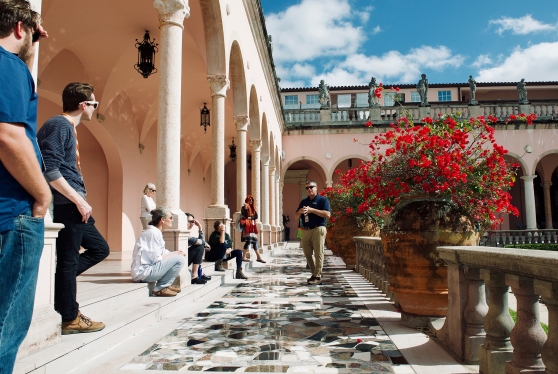 Art and Science Incubator participants on a tour of Ringling Museum of Art. Photo by Gavin Bacon.

There is a saying that goes, “It’s not like ecology is rocket science… it is much harder.” That facetious phrase reminds us that ecosystems—habitats and the web of life they support—are more complicated than perhaps they seem. Communicating environmental issues can be challenging as well. How do you make something relevant that to many people is… uninteresting? Depressing? Frightening? Challenging? Archbold Biological Station in Venus, FL is turning to the arts to help connect people with science and hoping it can bring out the human side of environmental issues.

“We want to reach new and wider audiences by supporting artists as science and conservation ambassadors,” explains Dr. Hilary Swain, Archbold’s Executive Director. “The last few years we have worked increasingly with artists at the local and state level, cultivated the artistic talents of our staff, and continued to use art in our youth programs.” Some of Archbold’s local art connections include the Museum of Florida Art and Culture MOFAC, the Heartland Cultural Alliance, the Highlands Art League, and a long-standing relationship with the Lake Placid Art League, whose members work with Archbold’s summer camp students. AIRIE, Artists in Residence of the Everglades, has been bringing their awardees for retreats at Archbold for the last three years. Highlands County residents may be familiar with Archbold’s earlier partnership with Mollie Doctrow, former Curator at MOFAC and now retired in California. Others throughout Florida are aware of Archbold long-term collaboration with Carlton Ward Jr., the National Geographic Explorer whose beautiful photographs and adventures have brought attention to Florida’s wildlife corridors.

In November 2019, Archbold’s Director of Education, Dustin Angell was invited to participate in a three-day art and science workshop at the Ringling Museum of Art in Sarasota, facilitated by playwright Chantal Bilodeua. The “Arts and Ecology Incubator” was described in a Ringling press release as, “an intensive workshop for artists, activists, scientists, citizens and educators interested in engaging, or furthering their engagement with, climate change through the arts.” 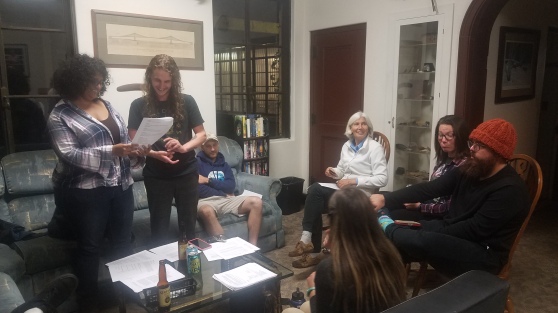 The Ringling experience motivated Angell, an educator and photographer, to further consider the role of art in addressing environmental challenges. He states, “Science doesn’t fix environmental problems, but is a tool for making informed decisions. People need the chance to process scientific information by relating it to their values and identity. Art provides that experience because it is a direct line to our feelings.”

After Angell returned. “I knew that when I got back to work I wanted to try something inspired by the event and outside my comfort zone, even if just to try it first with Archbold staff. I decided to organize a theater event. I was delighted when 20-25 people chose to turn up and participate in the theater evening”.

Climate Change Theatre Action, which happens every two years, uses five-minute plays inspired by environmental topics. Angell learned about it while at the Ringling event. Throughout the USA and internationally, around 275 productions were held to coincide with a 2019 international climate conference in Spain. Each theater venue chose from fifty plays written by fifty different writers from around the world. The tone of the plays ranged from light-hearted to serious.

Archbold staff selected eight plays, picked their parts on the spot, and acted out the scripts together during an informal table read on December 18, 2019. The writers of the selected plays were from the USA, Czech Republic, Iraq, UK, New Zealand, Canada, Australia, and Singapore. The topics of the plays were just as diverse, ranging from talking icebergs, to a magazine’s photo-editing department, and retellings of classic fairy tales.

Bilodeau, the creator of Climate Change Theatre Action, was appreciative of Archbold’s participation at Ringling and in the theater project. “It was very meaningful to have a scientific institution such as the Archbold Biological Station participate in Climate Change Theatre Action. It showed that it is possible to bridge the worlds of arts and sciences in beautiful ways. It is my hope that this kind of cross-pollination can lead to more collaborations between all kinds of institutions in the future.”

Archbold’s Librarian Joe Gentili, who helped organize and participate in the event, valued the chance for staff to discuss climate change in a non-academic atmosphere. He says, “I think we all put real thought into a serious topic and were able to have light-hearted fun at the same time. Maybe it got everyone to think about actionable things they could do themselves going forward.”

Angell says these events showed him a new way to teach science. “I don’t know if we will try this when it comes around again in 2021, but I am now energized for Archbold to provide more arts-based and theater experiences for our visitors and students.”