Archbold staff members, Dustin and Emily Angell at a research site in the Canadian Rockies

Students and researchers come from around the country to Archbold Biological Station in Highlands County because it offers something special: VIP access to the natural habitats and ranchlands of Florida’s Heartland, decades of scientific data, on-site experts, lodgings, and meals. Archbold is one of approximately one thousand field stations around the world. Each is different, but all offer access to the outdoor laboratory that is the natural world. This summer, two Archbold staff, Dustin and Emily Angell were invited to  a field station in the Canadian Rockies to meet the scientists there and see what research they are pursuing.

Emily is an Archbold Research Assistant monitoring endangered birds at the Avon Park Air Force Range and Dustin is Archbold’s Education Coordinator. The couple moved to Highlands County together from Syracuse, NY to accept positions at Archbold.. “This trip  was part of our 5th wedding anniversary road trip,” said Emily. “We visited a field station in Costa Rica as part of our honeymoon, too.”

The Biogeoscience Institute they experienced in Canada is run by the University of Calgary and lies in Kananaskis Country, Alberta, just to the east of Banff National Park. The campus includes laboratories, classrooms, cabins, a library, a cafeteria, and nature trails. Most of the field research is conducted at nearby properties. Each summer, the cabins, some dating from a prisoner of war camp established during WWII, fill with teams of researchers from various universities. During their three night stay, Dustin and Emily were able to accompany four different research teams made up mostly of undergraduate and graduate students.

Each team worked at different off-station sites on a range of projects including research on butterflies, beaver dams, bats, and hydrology. Dustin appreciated the adventurous field conditions, saying, “We hiked up mountains and slogged through wetlands. I was quite impressed with the team who scampered over a mountaintop while looking for Rocky Mountain Apollo Butterflies.” That research, begun in 1995, looks at how these butterfly populations persist in the face of climate change, extreme weather events, and reduction in habitat. Led by Dr. Steve Matter, it is part of a collaboration between the University of Cincinnati, University of Alberta, and Western University.

The experience that stood out most to Emily was visiting beaver dams. She recalls, “I was impressed by the extent to which the beavers had altered the landscape. The continued presence of beavers is really important. They’re some of the world’s most amazing engineers; one had even incorporated a moose antler into its dam!” Doctoral candidate Gregory Lewallen and graduate student Amanda Ronnquist took Emily and Dustin on a tour of beaver dams in the area. One of Ronnquist’s research sites was a beaver-engineered bog that regulated water flow through a valley. Lewallen’s work focused on beaver dams’ effectiveness in restoring waterways by fighting erosion and filtering out silt. Beavers are found throughout most of North American, including Florida, but not as far south as Highlands County.

Visiting the Canadian field station was also about sharing stories from Archbold. “The staff and students were curious about Florida,” says Emily. “I gave a presentation about my work at Archbold with Red-cockaded Woodpeckers in Longleaf Pine forests. They don’t have either in Canada, so it was nice to talk about something new with them. Our locations are quite different, but we share many of the same research priorities, like monitoring rare species, working on water quality, and studying soils and climate.”

Dustin Angell added, “The best part about visiting field stations, whether it’s Archbold or the Canadian Rockies, is getting to see natural areas through the eyes of the researchers that study them.” 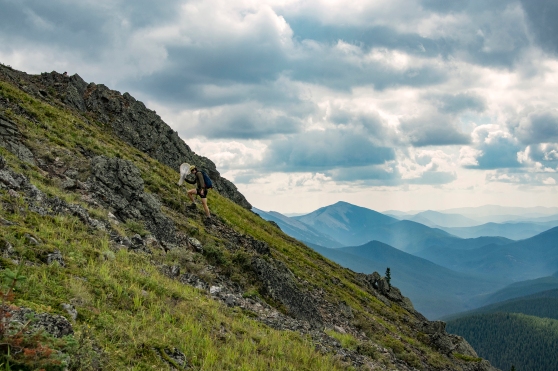 Researcher Sean Bishop on a mountainside looking for rare butterflies