Last Friday Archbold Biological Station’s Executive Director, Dr. Hilary Swain, had the opportunity to visit the New York Botanical Garden in Bronx, NY. Swain, accompanied by Archbold Board of Trustees members Mary Hufty, Lela Love, and Vevie Lykes Dimmitt, and Archbold Director of Philanthropy Deborah Pollard, enjoyed a special tour of the William and Lynda Steere Herbarium and the LuEsther Mertz Library. They were hosted by staff members Doug Daly, Curator of Amazonian Botany and Director of the Institute of Systematic Botany, and John Mitchell, Honorary Curator. “The New York Botanical Garden is an iconic living museum, a major educational institution, and a plant research and conservation organization,” Daly explained while on the tour. “Founded in 1891, this has always been a botanical garden with a conservation mission – to conduct basic and applied research on the plants of the world with the goal of protecting and preserving them.” 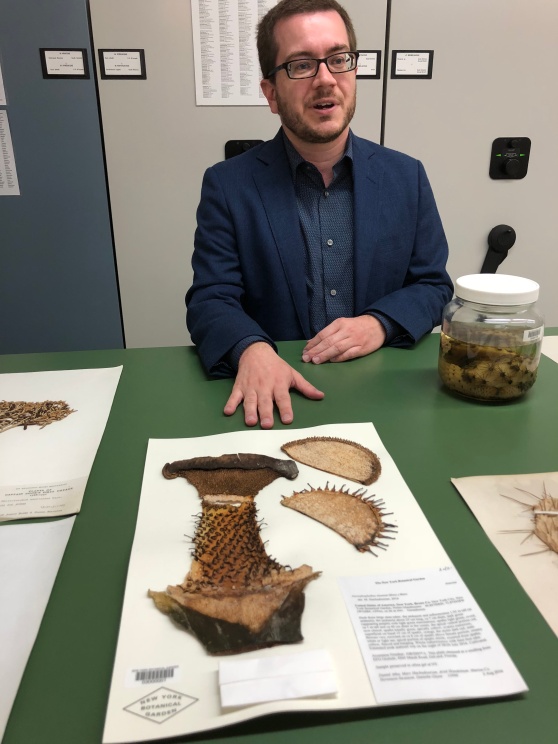 Matthew Pace, Assistant Curator at the William and Lynda Steere Herbarium, pulls out a plant specimen. Photo by Hilary Swain.

The group first had the pleasure of visiting the Rare Book and Folio Collection in the Library. “The Library’s outstanding collections represent over a century of commitment to botanical and environmental research,” Curator of Special Collections, Stephen Sinon, explained. “The breadth and accessibility of its holdings provides the services needed to support the Garden’s diverse research, instructional and outreach programs. The Rare Book and Folio Collections include the earliest manuscripts and printed books.” Housed here are field notes, books, and transcripts written by the famous botanist and early explorer of Florida John Kunkel Small. This name is a familiar one to Swain, who notes, “Exploring Florida in the early part of the twentieth century, John Kunkel Small was botanizing at Archbold before there was an Archbold! The Garden has had a long-standing history with this region of Florida, and still to this day sends botanists attracted to our extraordinary plant diversity to collect specimens.”

Stephen Sinon, Curator of Special Collections at the LuEsther Mertz Library, shows off an illustrated botanical field guide in the Rare Book and Folio Collection. Photo by Hilary Swain.

The Archbold tour group then had the opportunity to view the Herbarium, holding a collection of more than 7.8 million preserved plant specimens. It is the fourth largest herbarium in the world and the largest in the Western Hemisphere. To date, about three million of these specimens have been made publically available online through the C.V. Starr Virtual Herbarium by scanning and digitizing, with more to come. “Documenting plant life is fundamental for the conservation and sustainable use of the species that make up all ecosystems,” Matthew Pace, Assistant Curator, said. “This understanding is generated through field exploration, collections research, and laboratory research that examines the biological and genetic mechanisms of plants as they relate to biodiversity.” After the tour, Swain noted how amazed she was with “the speed and ease” with which the Garden’s staff were digitizing specimen. “It was almost a factory-like process!”

During the visit, Swain gave a seminar to Garden staff and interns, entitled “Archbold Biological Station: 75 years of research, conservation, and education.” Her talk paid homage to the connections shared by Archbold and the New York Botanical Garden in this region of Florida, and the many reasons continued collaborations are vital to their shared interests. Like the New York Botanical Garden, Archbold has its own herbarium. Though it contains only 4,580 specimen, completely dwarfed in size by the Garden’s, Archbold’s collection is an integral part of the North American Network of Small Herbaria. “Small herbaria constitute a major source of information for understanding plant diversity,” the Network notes. “These collections are typically regional in scope and frequently hold specimens that are unduplicated in larger herbaria.” This is true of the six Florida Ziziphus specimens in Archbold’s herbarium, while none are found online yet for the New York Botanical Garden. “It’s the rarity of this species, which is only known at 14 locations across Polk and Highlands Counties, that make specimens in small regional herbaria vitally important,” Swain said.

“In another example,” Swain explained, “Archbold’s herbaria contains 17 specimens from the genus Dicerandra, the scrub mints. Dr. Pam Soltis and her students at the University of Florida have used the specimen records from Archbold’s collection, combined with those at other collections, to distinguish among Dicerandra species and infer the pattern of evolution in scrub mints based on habitat differences. Evolutionary and ecological research can be greatly enhanced by the use of specimens from many herbaria.” 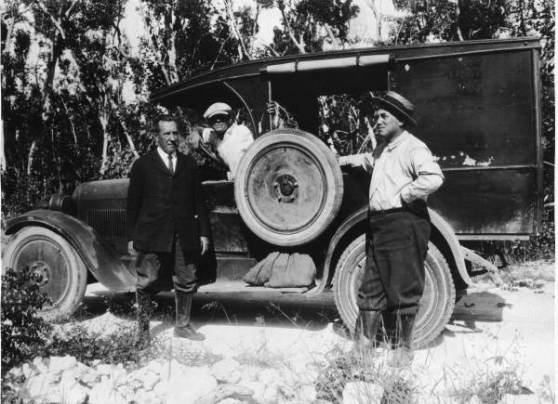 “Archbold and the New York Botanical Garden share many research and conservation goals,” Swain reflects. “Both of our organizations are conducting research on plants and their habitats, monitoring changes in biodiversity over time, and translating our results into effective conservation and management. We at Archbold look forward to future scientific collaboration with the New York Botanical Garden!”

Join 119 other followers
Follow The Scrub Blog on WordPress.com