When most citizens of Highlands County are happily snoozing in their beds, or perhaps binge-watching their favorite TV series, the natural world at the Archbold Biological Station goes into hyperactivity. From their daytime refuges innumerable moths emerge, spread their wings, and throw themselves into the night air. Biologists at the Archbold Biological Station, as elsewhere, tend to be diurnal. Most of us go about our daily lives with little notion of the ‘nightly’ or nocturnal lives of moths. 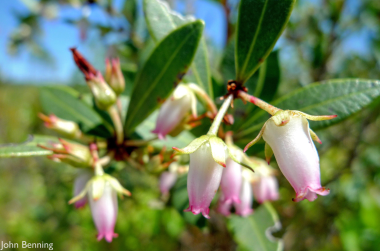 A blooming Shiny Lyonia. The opening into the flower is very narrow, suitable for the long, slender tongue of a moth. Photo by John Benning.

The number of species of moths in most natural areas is astonishing. The last complete survey at the Station, published in 1992, lists more than 1,000 species, and a good number of additional species have been found during the last 25 years.

The great majority of adult moths have a long coiled tongue, used (as in butterflies) to slurp nectar out of flowers. Considering the abundance and variety of moths, they must be important pollinators of flowers, taking over at night when butterflies, bees, and flies are resting. It is difficult to show the importance of moths as pollinators because it is challenging to survey flowers in the dark, especially when the use of a flashlight would tend to distract the foraging moths.

One example of a moth-pollinated flower at Archbold is Shiny Lyonia, also known as Fetterbush. This common shrub has stalks of pink, bell-shaped flowers in the spring. “For years I checked flowering Fetterbushes, hoping to find their pollinators, but only saw a few stray butterflies,” said Dr. Deyrup.

A student intern, John Benning, dedicated his research to this riddle, but initially fared no better. Finally, in desperation, John patiently waited by the plants at night. He then observed that the flowers are visited by fast-flying owlet moths; eventually he wrote a scientific paper on his discovery saying the moths are “capable of carrying large pollen loads” and that “nocturnal pollination is the primary driver of fruit set in Fetterbush”.

The beautiful Bella Moth is a species that has been studied by several researchers at Archbold, especially Dr. Thomas Eisner from Cornell. The caterpillar of this moth feeds on the highly toxic seeds of the Rattlebox plant. The poison is stored in the caterpillar, so that the adult moth is also poisonous. Male moths pass on the toxin with their sperm during mating, and the female incorporates the poison into her eggs. In this way the male protects his offspring, even though he is an absent parent. Females are able to detect which males can offer the most toxin, and prefer to mate with males with the greatest offering of poison.

Bella Moth. Protected by birds by its poisonous blood, this moth is sometimes active during the day. Photo by Stephanie Leon.

The Station also supplied another poisonous moth that Dr. William Conner studied in his lab at Wake Forest University. Males of the Scarlet-Bodied Wasp Moth fly about collecting toxins from poisonous plants, such as the common Dog Fennel. During mating some of the poison is passed on to the female. The male also stores toxin in a pair of pouches filled with tiny, powdery scales. To the amazement of watching scientists, high-speed photography of courtship revealed that the male also defends his mate by explosively emptying his pouches, showering her with a confetti of toxin-laced scales that protect her from predators. 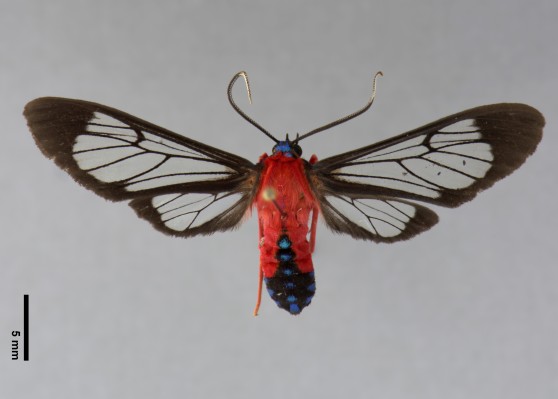 Scarlet-Bodied Wasp Moth. This uncommon species is active both day and night. Photo by Stephanie Leon.

So next time you are out in the dark, remember you are not alone. Hundreds of moths are out there too, silent wings in the night, off on their own missions, dealing with the hazards of bats and spider webs, their sensitive antennae homing in on scents of which we know nothing. We are left just standing in the dark.