There are many beautiful natural areas in Florida. In places such as Myakka River State Park and Everglades National Park people can walk for miles across lands barely changed by humans. Florida also has vast areas of lands, such as cattle ranches, which contain both natural habitats, lands improved for agriculture, and disturbed areas. At Archbold Biological Station we own or manage nearly 20,000 acres serving as natural laboratories for scientific research, education, and conservation. Some of the Archbold property is pristine, wild Florida, as it was hundreds of years ago. But many parts of the land Archbold owns and manages were, at some point, and often decades ago, altered from their natural condition. According to Kevin Main, Land Manager at Archbold, “In some places at Archbold, especially on the 3,600-acre area known as the Reserve, we have chosen to focus on restoring these altered lands back to a more natural condition. Most native animals and plants, including many threatened and endangered species, require natural ecosystems in order to thrive.” 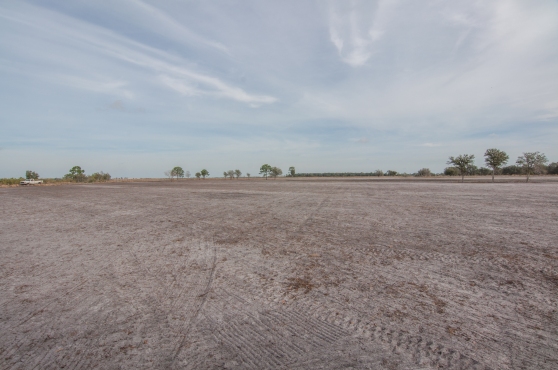 The activities necessary to restore lands and waters to a more natural condition depend on the type of disturbance. Sometimes the land is so degraded that only partial restoration can be realized. “But even partial restoration can be better than doing nothing”, Main noted. “For example, we have a few areas embedded within our Florida scrub habitat that are former citrus groves. We are replanting some of these areas with native plants. We know these native plants are very slow growing and that it may take generations for the habitat to return to a condition similar to what existed before the land was cleared. Nonetheless, areas that have been partially restored are more valuable for conservation than land lying fallow and abandoned.”

On Archbold’s Reserve, purchased in 2001, much of the land had been ditched decades ago to drain wetlands and improve conditions for cattle grazing. Then non-native pasture grasses, such as Bahia grass, were planted. To restore these areas, said Main, “Ditches can be plugged and blocked to restore hydrology and native plants and seed can be added. The resulting landscape can improve water quality, with wetlands slowing water flow and taking up nutrients, improving conditions for wildlife while still allowing for cattle grazing.” Fire is also an important restoration tool. Early on, scientists had not understood the absolute necessity for fire to maintain scrub and other habitats. Fire was therefore excluded on Archbold’s original thousand-acre ‘Red Hill’ property for decades. The resulting fire-suppressed and overgrown vegetation became unsuitable for many species. Scrub-jays disappeared. Populations of rare plants declined. “Gopher Tortoises retreated to an old garden area and to the edges of sandy woods roads” said Archbold’s Restoration Ecologist Betsie Rothermel. “Tortoises were common across all of Red Hill before fire was removed from the area starting in 1927. Now that we have been conducting prescribed fires we are seeing tortoises move back into the open areas where grasses are becoming more dominant. In some places mowing is necessary to make conditions safer for burning and to change the vegetation structure so that, after the fire, the area will better resemble the open conditions required by many rare species.”

“We’ve learned a lot about restoration in the last 20 years,” said Main, “but we’ve got so much more to learn. What’s the most efficient way to do restoration? What’s most cost effective? And how can we share what we know with other landowners so they can consider restoration of some of their property? We are indebted to the expertise of companies such as ‘The Natives’, who assisted with restoration including removal of non-native invasive species and planting of native species. Some restoration would not have been possible without additional outside support from sources such as the US Department of Agriculture Natural Resources Conservation Service and the United States Fish and Wildlife Service. Partnering with other organizations and with our neighbors allows restoration to happen over larger landscapes, thereby benefiting wildlife at a bigger scale.”

While landscape-scale restoration can provide multiple benefits to a wide variety of wildlife species, small-scale efforts are also effective. According to Main, “People with small properties, even a ¼-acre lot, can try restoration to benefit wildlife at the local level. For instance, if you have an invasive, non-native plant such as Cogon Grass on your property, eradicate it before it spreads to a larger area and you will preserve the small-scale biodiversity. If we all do our part we can improve conditions for wildlife in many ways.”