With the increasingly severe drought during this years’ dry season, there is a lot of news about wildfires. As one of the lightning capitals of the continent, fire has been a natural part of the cycle of life in Florida for millennia. Fire is essential to conserve the Florida scrub that we love and protect at Archbold Biological Station and elsewhere in Highlands County. Fire is essential for maintenance of many other Florida ecosystems including pinelands, prairies, and most wetlands.

Multiple drone images are mosaicked together to form a map of a prescribed burn at Archbold. Photo by Vivienne Sclater and Kevin Main.

Archbold uses scientific knowledge of fire to guide how best to use fire in management of its own lands and to advise other public and private land managers. Hilary Swain, Archbold Director, notes that “Analyses and dating of the deep lake sediments from Lake Annie at Archbold document that fire, caused by lightning, has been an essential part of local ecosystems for at least 40,000 years. Scientists working with tree ring data from Avon Park Air Force Range have recorded the presence of regular fire over hundreds of years as a natural lightning-caused process. The tree ring data show the prevalence of late spring and early summer fires in the historic record.” Eric Menges, Program Director of Archbold’s Plant Ecology program, added, “Plants and animals of the Florida scrub are superbly adapted to fire. For example, most plants re-sprout and others rapidly recover via reseeding. Animals move away from a fire or survive below ground in burrows and in the sand. Without fire Florida scrub becomes overgrown, and the rare and threatened plants and animals—for which this ecosystem is celebrated—may disappear. This includes animals such as Florida Scrub-Jay, and Gopher Tortoise, and many rare plants. They do not persist in overgrown fire-suppressed scrub habitat.”

Kevin Main, Archbold’s Land Manager, explained that “Archbold uses prescribed burns, fires set deliberately by trained staff under specific conditions, to maintain plant and animal populations in their natural cycle—without fire they are lost. Every year we conduct prescribed burns over several of the 200 management (burn) units at Archbold. Each burn unit, ranging in size from tens to hundreds of acres, is designated for a different fire return interval, for example burns every 2-6, 10-19, or 20-40 years, depending on the type of vegetation. This ensures there are always different places at different stages in the ‘fire cycle’. After each burn we carefully record the boundary of each fire and the ‘fire intensity’ within each burn: some areas may be only lightly scorched and other patches burned completely.” Eric Menges and Kevin Main recently completed an analysis of nearly fifty years of Archbold’s fire mapping data, from 1967-2014, to document the success and effectiveness of the fire plan.

New developments in technology are now making it much easier to map Archbold’s fires. Archbold Data Manager, Vivienne Sclater said, “A few years ago, to map a burn, Archbold staff took photos from an ultralight plane flying over the burned areas. These oblique images were hard to work with and time-consuming to process. We had to wait for multiple fires before flying to lower the cost, reducing map accuracy since fire-adapted plants resprout quickly.” These days, Archbold is working with drone operator Jen Brown from Into Nature Films, using drone imagery to map prescribed fires and other land management activities. 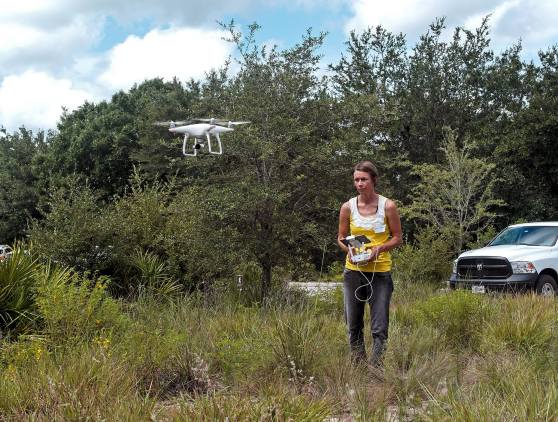 Sclater continued, “With a drone, we fly over the burn just days after the fire, to capture images with the camera level and pointed directly down. Drone software programs create an accurate image of the burned area. Kevin Main, Archbold Land Manager, then maps the severity of the fire. Our burn maps are used to show how plants respond over time. We are also exploring exciting 3D mapping possibilities using drones to measure other factors related to fire, such as tree density. Drones are the way of the future for research and conservation.”

Join 119 other followers
Follow The Scrub Blog on WordPress.com