Florida cattle ranches provide more than beef and beautiful views. Cattle share the land with a rich mix of wildlife, including birds like Crested Caracaras, Wild Turkeys, and Sandhill Cranes. Some ranchers are even helping solve Florida’s water management problems. They are working with the state government on controlling the flow of water on ranchlands to make things safer for people and wildlife downstream. Researchers from Archbold Biological Station are helping with the science.

This project, the Northern Everglades Payment for Environmental Services (NE-PES) aims to pay ranchers to hold and slow water as it moves through ranches toward Lake Okeechobee. This helps because ranchland makes up over one-third of a large Florida land area called the Northern Everglades, which is the headwaters to Lake Okeechobee and the Everglades. It also works because ranches already have ditches, and these can be converted at low cost into water management sites with simple structures and automated electronic monitoring equipment.

Steffan Pierre is a researcher for Archbold Biological Station and he maintains the NE-PES monitoring stations. He invited me and his colleague Federico Borghesi for a visit to his favorite NE-PES property, a cattle ranch near the western shores of Florida’s second largest lake, Lake Kissimmee. Steffan visits this ranch and several others for once-a-month checkups. His job is to locate the monitoring station and make sure everything is working. The stations are self-sufficient and automated, sending all their data wirelessly for Archbold researchers to oversee. Each station has a water flow  structure that acts like a small dam, solar panels for electricity, and a fiberglass box that protects the computer inside from weather and wildlife. 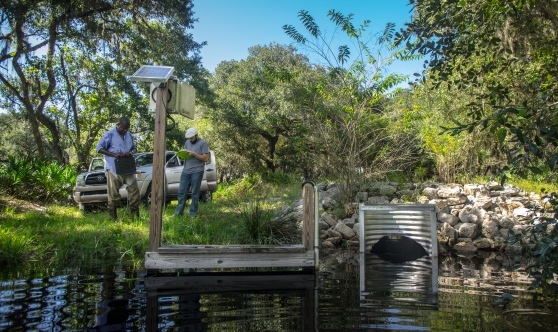 Researchers Steffan Pierre and Fede Borghezi use a computer and clipboard to check water measurements at a NE-PES site in Florida’s Northern Everglades. In the foreground is a water flow structure and monitoring equipment. Photo:Dustin Angell Today, Steffan has to check five monitoring stations on this property. This requires 4-wheel drive, experience, and some good luck. It is August and the wet season has saturated the land. To find the monitoring stations we drive a pickup truck though flooded roads, a small ditch, and even the shallow edges of a pond. There are no offices or homes on this ranch.  We are probably the only people on the whole property. If we get stuck, I worry help will be hard to come by. Steffan’s reply, when I ask what happens if we do get stuck, is an amused, “We just DON’T get stuck.”

Steffan is right and we never have a problem with the vehicle. At each station he opens up the fiberglass computer box and wires up the portable computer he always brings with him.  With this he checks to make sure everything is running properly. He or Federico also use a measuring stick to verify the depth of the water in the ditch. If something with the monitoring station isn’t working, he will repair it on the spot. 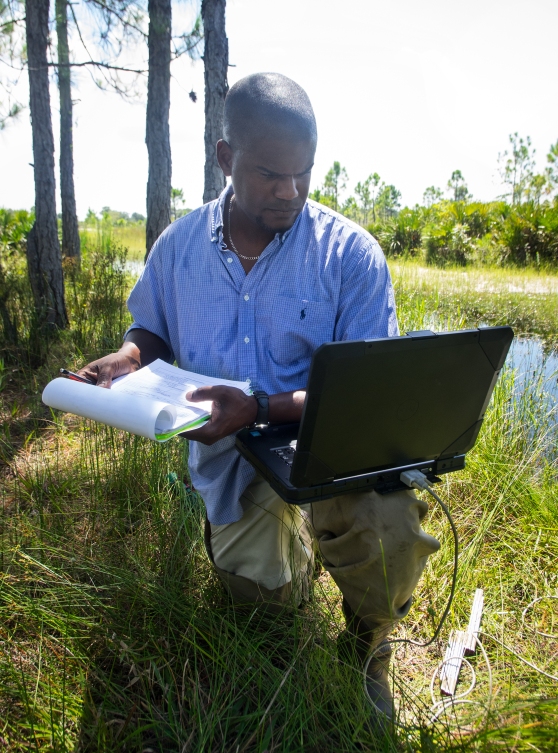 NE-PES is one of the tools used by the South Florida Water Management District or SFWMD. These are the people who take care of the water for most of the southern half of Florida, including parts of Highlands County where Archbold Biological Station is located. They are responsible for the drinking water of over 8 million Floridians, as well as the water health of rivers, lakes, coastal estuaries, and the Florida Everglades.

SFWMD has a big job. Most of South Florida would be wetlands and swamps if it wasn’t drained with man-made ditches and canals to make room for people. When it rains during Florida’s wet season, SFWMD makes sure the water doesn’t flood people’s homes and farms. They do this by holding water in Florida’s largest lake, Lake Okeechobee. When that isn’t enough, they can send water from the lake to the coasts using canals and rivers. Unfortunately, the lake is highly polluted from all the water flowing into it. Some of this water travels hundreds of miles to the lake and picks up pollution, often in the form of extra nutrients from fertilizer, along the way. Even polluted water from south of the lake, which would normally flow southward, is pumped northward for storage in the lake. So when the lake water is sent to the coasts, the extra nutrients cause algal blooms that turn the water and air toxic. Humans can get sick from just breathing the air. Marine mammals like dolphins and manatees, as well as fish, arthropods, and plants living in the toxic water may die. The monitoring stations Steffan maintains are aimed at addressing this serious problem.

The NE-PES project is a combination of creative thinking and a win-win attitude. Ranchers are paid by SFWMD to hold back water in some of the ditches, wetlands, and pastures on their property. This slows the flow of water, helping keep Lake Okeechobee from flooding, and giving time for the water to be cleaned naturally as it resides longer in wetlands and percolates slowly into the soil. The overflowing ditches of these NE-PES sites also improve habitat for alligators, frogs, storks, and other wildlife. The money helps the ranchers continue ranching, which protects the plants and wildlife living there.

In Florida’s heartland, water connects everyone to the ranchlands. If you live in Lake Placid, Sebring, or Avon Park, the next time it rains in your neighborhood some of that water will likely flow through a cattle ranch on its way to Lake Okeechobee. Along the way it may even encounter Steffan on his monthly rounds.

The NE-PES project and SFWMD’s other tools are not yet enough to fully solve our water pollution problems, especially as Florida’s human population grows so rapidly. So, how will we solve them? No one knows yet, but one thing is clear – we will need help from the ranchers and from scientists like Steffan. Text and photos by Dustin Angell