You never know what you’ll observe during a walk at Archbold. As I was walking around the Explorer’s Loop one morning, I noticed some commotion in the distance. Looking with my binoculars, I saw a Blue Jay and a juvenile (young) Red-headed Woodpecker harassing an American Kestrel. I’m so glad that I was carrying my camera, because the battle about to begin was epic.

The kestrel had landed in a dead tree and seemed to be minding his own business, but no matter how small they are, raptors are usually unwanted by other birds. A Blue Jay and Red-headed Woodpecker had formed an alliance and were harassing the kestrel. When birds do this, it’s called mobbing.

Usually I see raptors flee immediately when they start to get mobbed, but this kestrel was feisty! He held his ground and even lunged at the jay a couple of times, all the while calling, “killee-killee-killee!” Soon, another Blue Jay arrived on the scene, probably the first jay’s mate. The woodpecker continued to provide moral support from the sidelines, or maybe he was just there to learn.

To my surprise, two Blue Jays and a woodpecker were still not enough to repel the kestrel! In swooped another juvenile Red-headed Woodpecker to the rescue!

Finally, the brave kestrel was overwhelmed. With one Blue Jay distracting the kestrel, one of the woodpeckers was able to sneak up behind the kestrel and scare him off his branch.

The kestrel took off, but the remaining jay followed in close pursuit!

The kestrel landed on another tree, but the jay did not give up. In fact, the jay attacked even more aggressively! 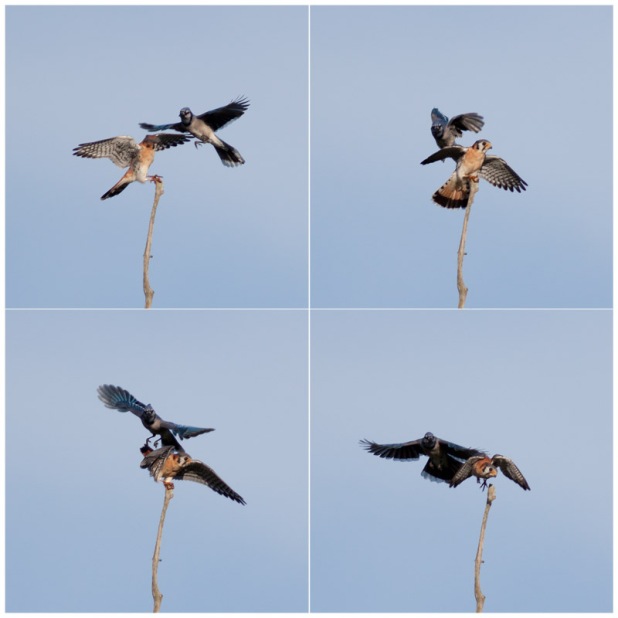 Before long, the jay (still being observed by the juvenile woodpecker) had chased the kestrel off his second perch. 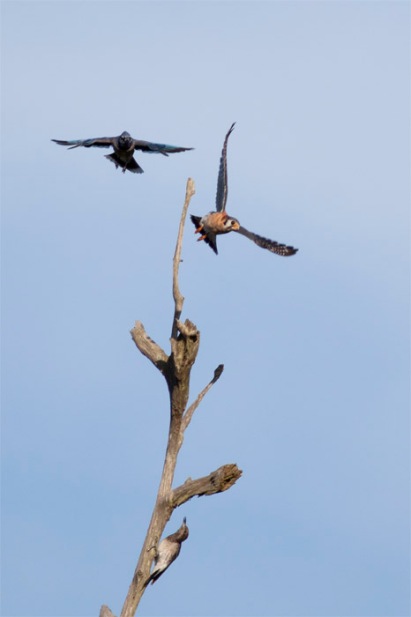 On the third perch, the kestrel put up a brave fight as the jay began attacking more viciously than ever! At one point the jay even grabbed the kestrel’s tail feathers!

After the second jay returned, the kestrel was forced to flee once again. By now, the woodpeckers had grown bored and left.

However, the stubborn kestrel flew in a circle and landed right back on the same tree. Maybe this confused the jays, or maybe they were getting frustrated, but for some strange reason, the two jays began to fight each other! 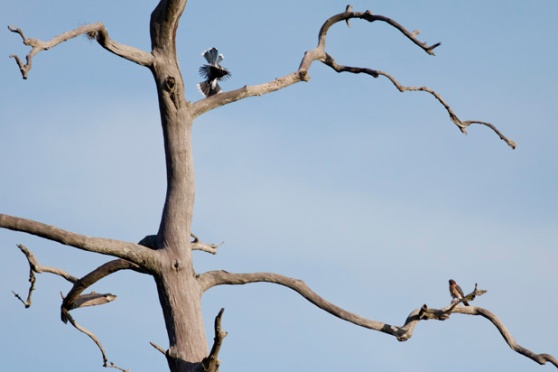 The weary kestrel seized the opportunity to strike back. To my astonishment, he flew up and knocked the jays out of the air as they were fighting!

After scoring this point against the jays, the kestrel decided he had had enough and flew off into the horizon. 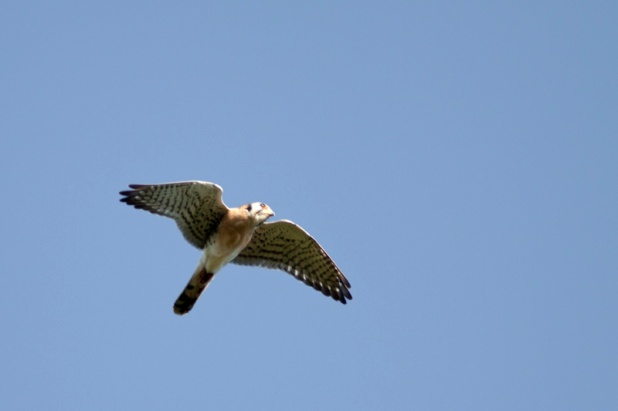